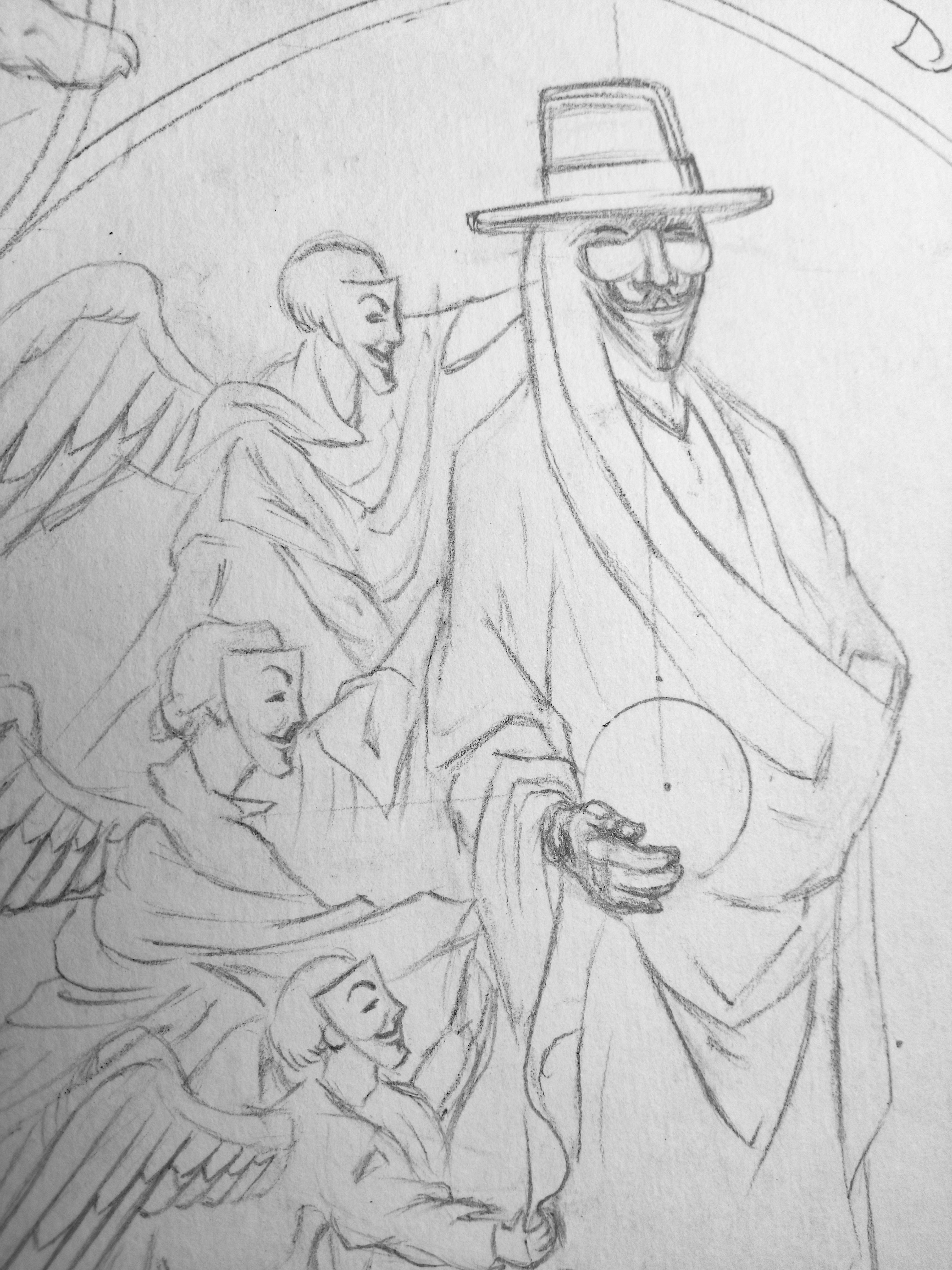 We are all Satoshi - the artwork

"We Are All Satoshi" is a story about the early history of Bitcoin. The impulse to create the graphic is not for the sake of the creating art itself. It is a memorial for generations to come immune to any correction or distortion. It is a part of Bitcoin's history, recorded not in books or internet articles but represented in the most ancient way known to mankind. Through images created through unquestioned pow.
"We are all Satoshi" is the first work that traces parts of Bitcoin's history in chronological order, representing a physical record of the ups and downs that the technology has gone through, including the entire early community of visionaries before hyperbitcoinization. I would refer to the artwork as scenes from the Old Testament before the global adoption took place .
The artwork is in no way intended to compare Bitcoin technology to religion in a literal or figurative sense.  The graphic "We are all Satoshi" is my contribution to immortalizing some of the biggest events that happened in the early years of adoption.
In this blog I will describe the progress of "We are all Satoshi" step by step until the very end.

"We are all Satoshi" is an artwork illustrating scenes from the early history of Bitcoin. In chronological order, 6 of the most important historical events in Bitcoin's history are presented, and the main scene is the introduction of the technology to the world by Satoshi himself.
All the figures are being portrayed wearing the Guy Fawkes mask, which has become a symbol of the peaceful struggle against injustice and oppression upon humanity. Hiding faces of all, including Satoshi himself, removing the individuality and reinforcing the sense of a common aspiration of all who have adopted the Bitcoin standard, by the instrument of the peaceful revolution that could liberate us from the enslavement of the current financial system. Completely in sync with the creator, We are all Satoshi.

"Fix the money and you will fix the world"

The main scene in the center of the composition shows Satoshi himself introducing Bitcoin technology to the world. Depicted at the moment of digging block 0 on 3 January 2009, he holds the physical manifestation of Bitcoin in his right hand. The logo became recognizable to the entire world in less than 10 years. His left hand remains hidden to the world. In one of his later emails he mentions

"I've moved on to other things. It's in good hands with Gavin and everyone."

The hidden left hand symbolizes this another project of his that he focused on afterwards. Satoshi is standing on a podium. On the front face of which is the hash of the Genesis block. This is the first step of the staircase that 13 years later millions of people have taken. Approximately every 10 minutes all the participants in the network take another step up, and when looking back one sees the tremendous evidence of the work we have done over the the last 13 years.
On his sides are drawn 7 of the earliest developers who helped Satoshi. Somewhere under the mask I have depicted Hal Finney, Gavin Andresen,Laszlo Hanyecz, Martti Malmi, Jeff Garzi and others. Some are represented under the bear, symbolizing their position on the project, criticizing the direction of development, while others that have remained true to Bitcoin are positioned under the Bull side. ( The RIGHT side ). The Bull and the Bear symbolize the ongoing emotional balance between skeptics and optimists about Bitcoin technology.
The physical touch of the creator's robes by the first devlopers is a reference to the online communication these people had through the emails whose notes have remained as an integral part of the early history of Bitcoin. They are presented as angels because despite their further criticism towards the protocol, their interest and contribution in the early days is of a great importance. 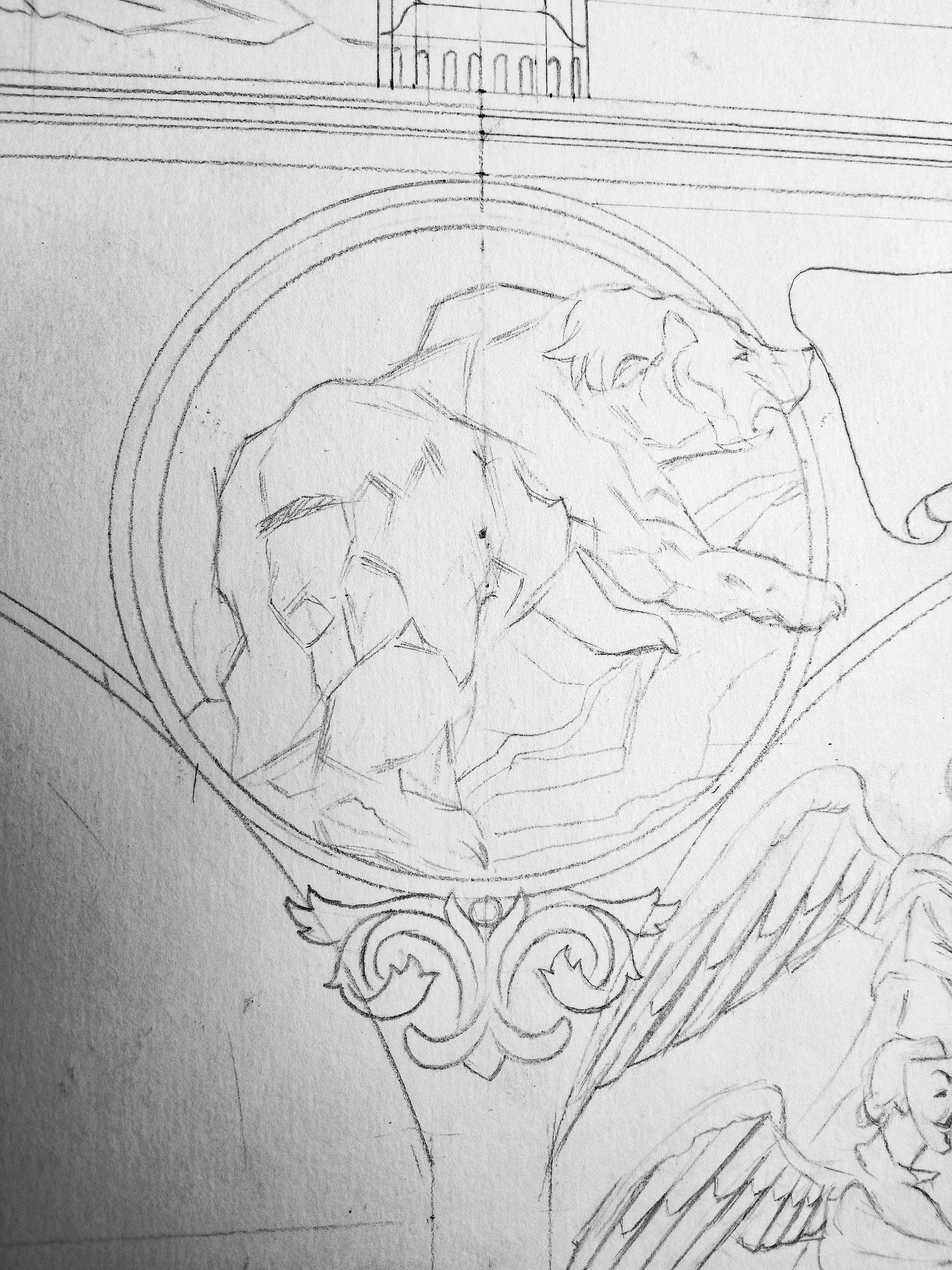 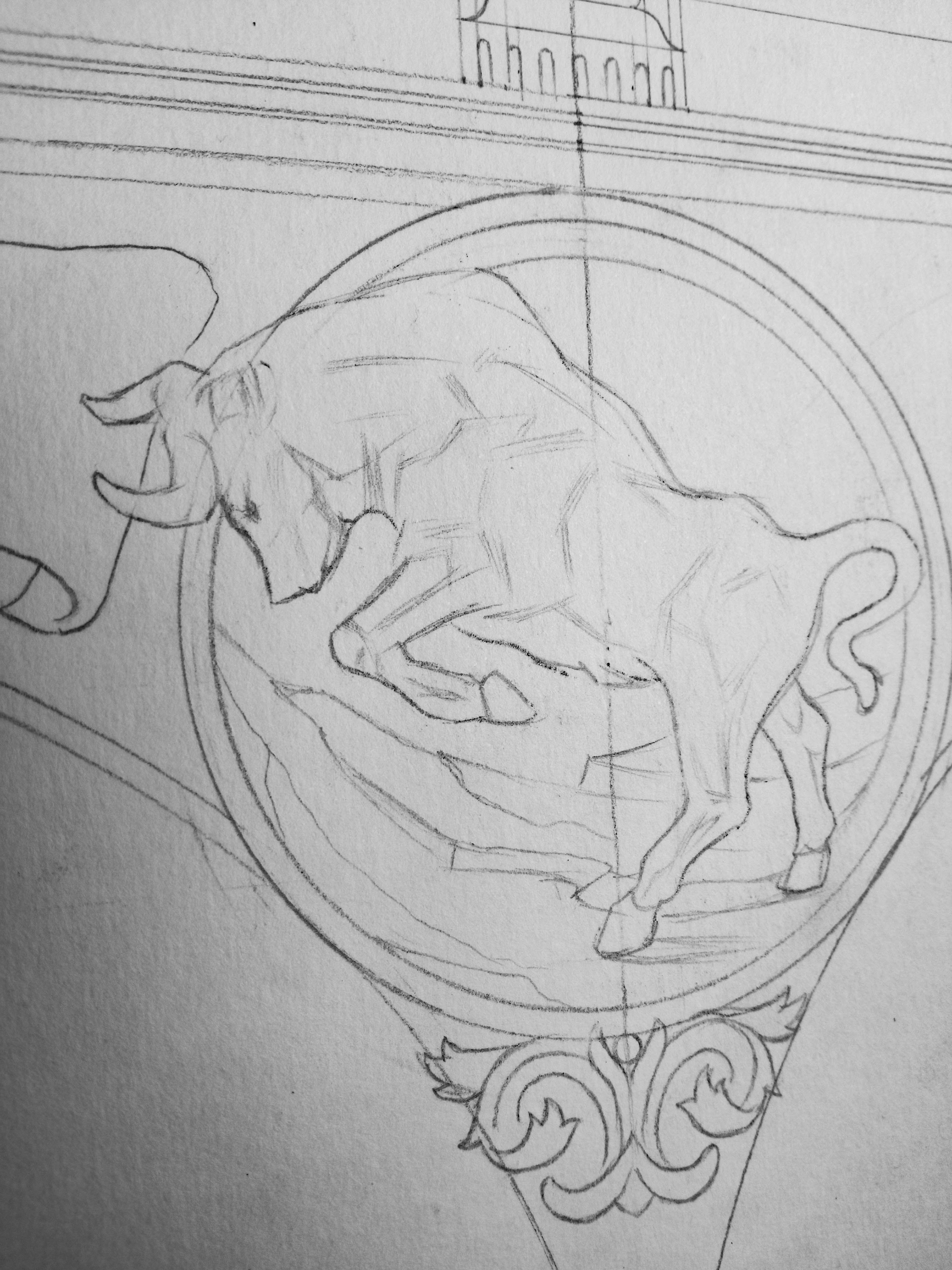 The Bear and the Bull in constant battle. 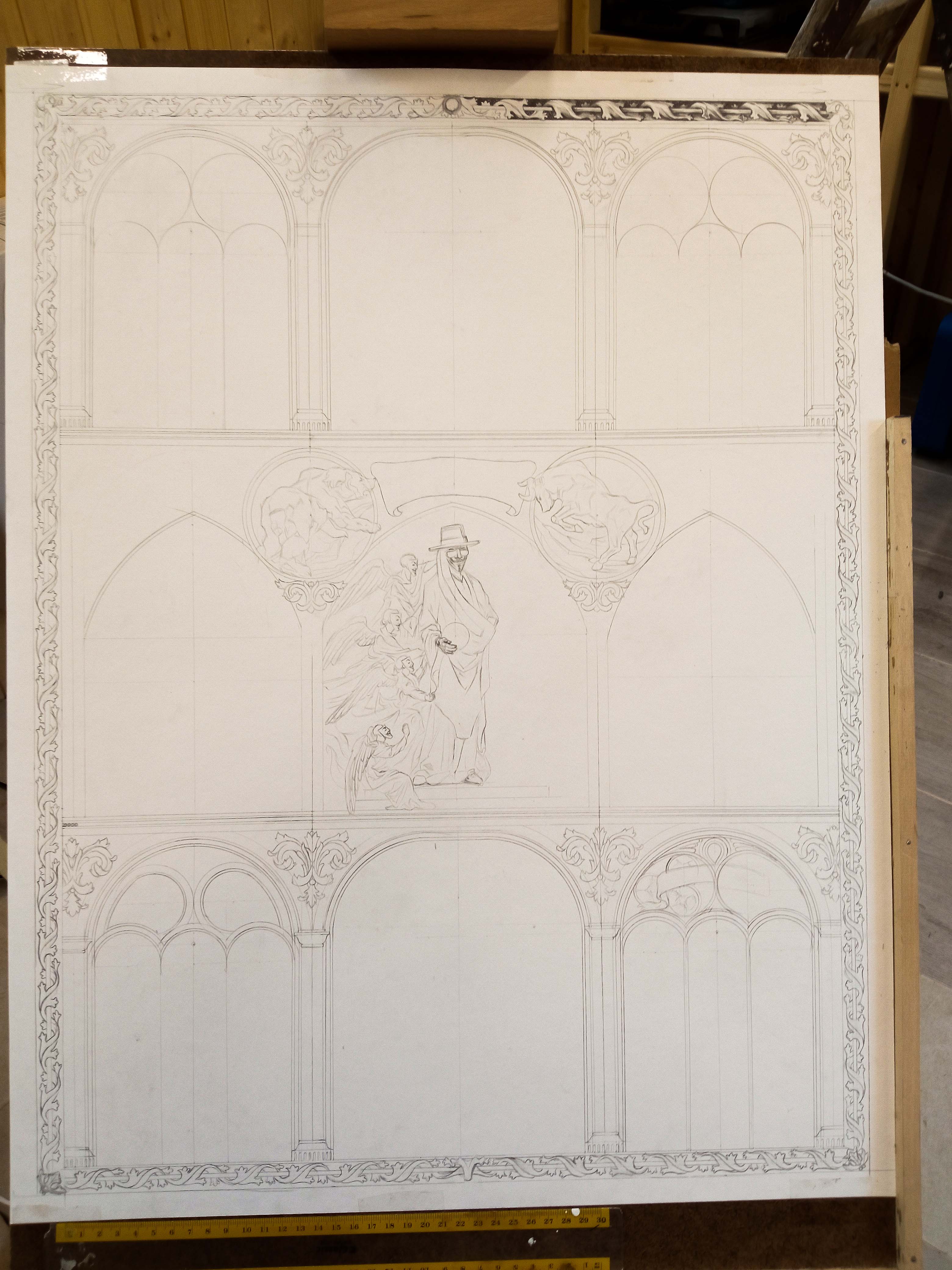 The very early stage of the process. I made a compositional project of which I drew the figures before immortalizing them on the original. It is unthinkable to start such a complex and large project without having a draft on which you clarify your project. Later I will upload a picture of the sketch I experimented on. 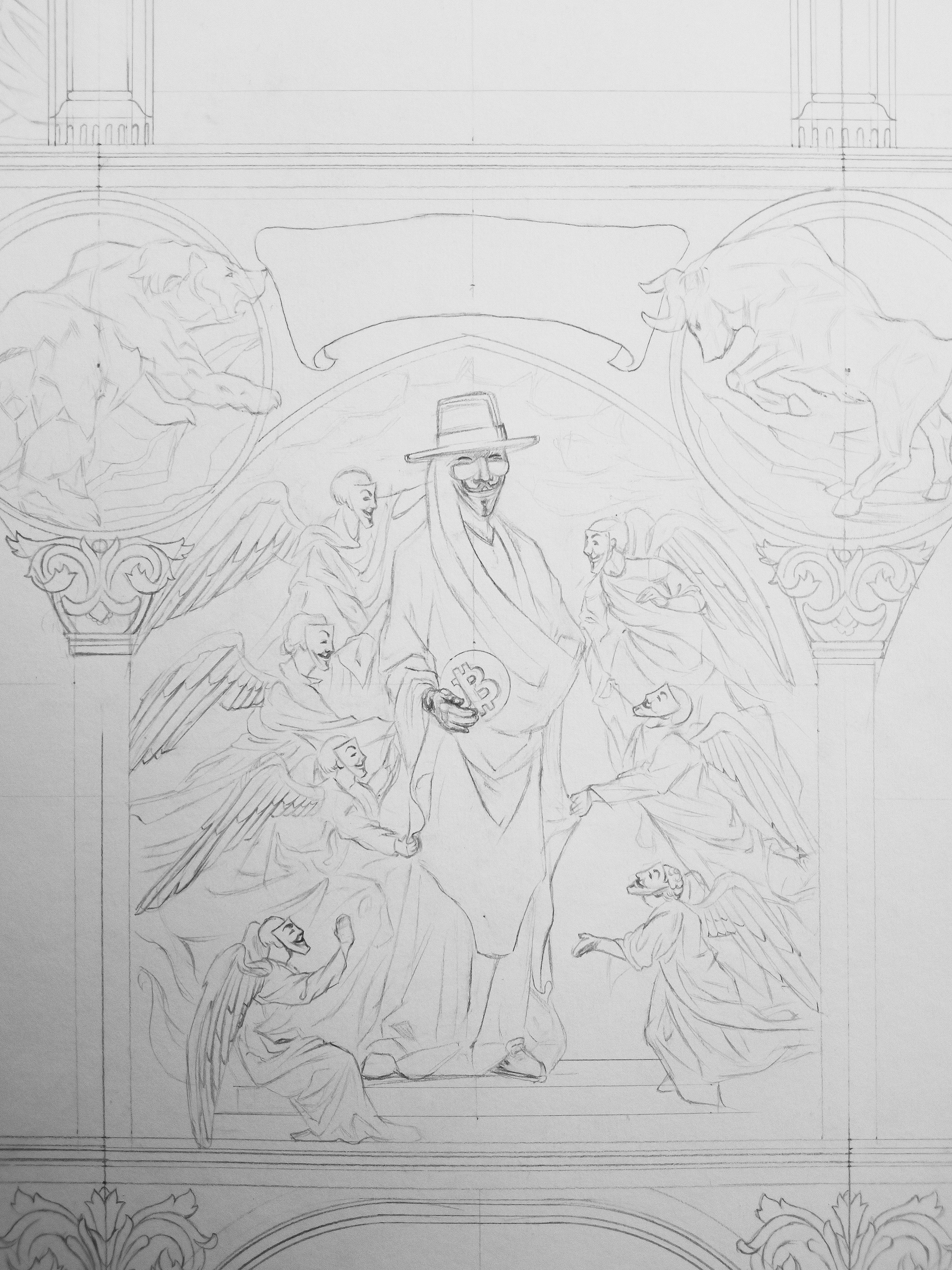 Not counting the time I spent on the rough sketch, just working on the orginal has taken me about  ~22 hours of work so far. This includes the cells of the individual scenes, drawing of the main scene, the bull and the bear as well as the whole frieze frame.

Scene one introduces one of the most interesting and early stories in Bitcoin history. On May 22, 2010, now known as Bitcoin Pizza Day, Laszlo Hanyecz agreed to pay 10,000 Bitcoins for two delivered Papa John's pizzas. Organized on bitcointalk forum, the Florida man reached out for help.

This is the first transaction in which Bitcoin has been used to exchange real value. A whole 9 months before bitcoin reach parity with the US dollar. Inevitably, this story is fundamental to the history of Bitcoin, laying the foundation of the use of technology for exchanging value. 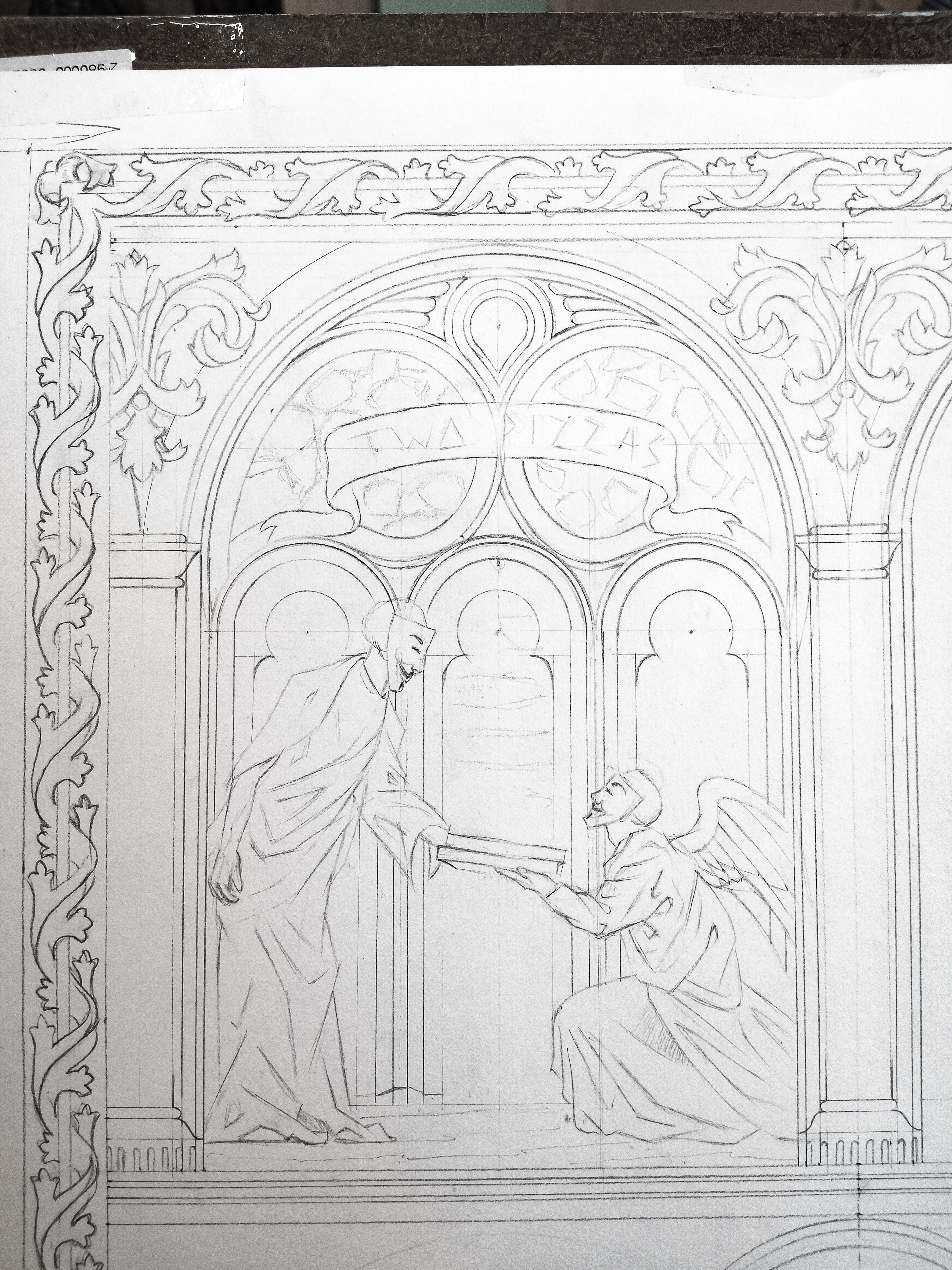 The scene represents the exact moment when Laszlo Hanyecz claims the most expensive pizza in the history of mankind !
( note: the wings of the carrier has been removed, from unconfirmed information the pizzas were cold when they arrived, so we won't give credit to the courier where there is none )

Today I put in another 6 hours of work, for total of 28h so far. I worked mainly on the second scene of the composition, namely The Silk Road event. As usual I sketched the composition on my draft, and once I got the position and scale of all the figures clear, I started bringing them over the original. I thought a lot whether to illustrate the creation or the collapse of the Silk road. In the end, I decided not to have the scene contain anything specific, but to purely symbolically depict the operation of the site.
The central figure can be conceptualised as Ross Ulbricht, the man who is currently paying a huge price for the creation of the site.  He symbolically connects two peers holding their hand, at the moment of exchanging value. In the background are presented other users in the community. Communicating with each other, realizing that Bitcoin works and can be used to exchange value they are amazed by this new technology. The Guy Fawkes masks are in line with the anonymity of all users of the site. 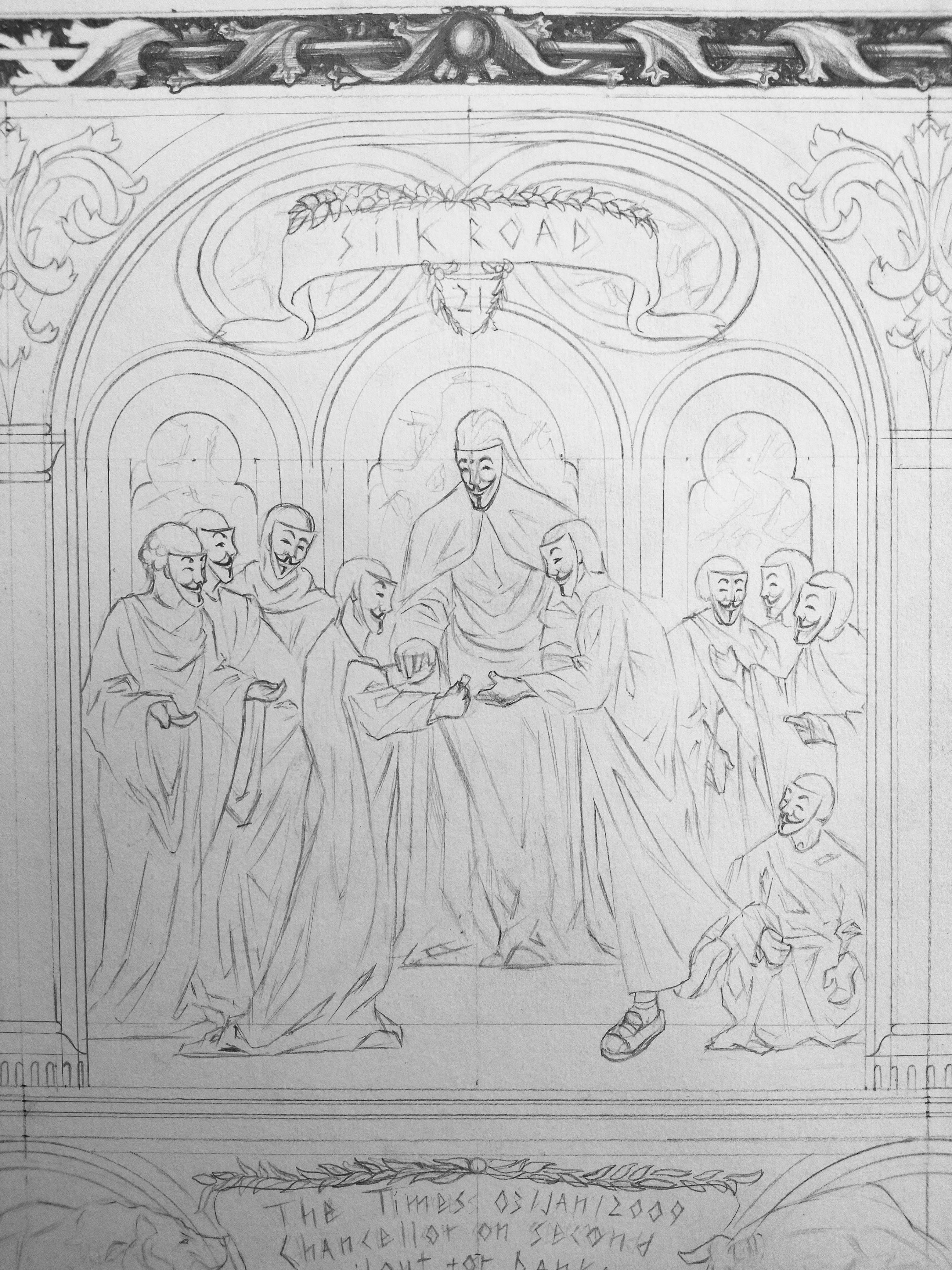 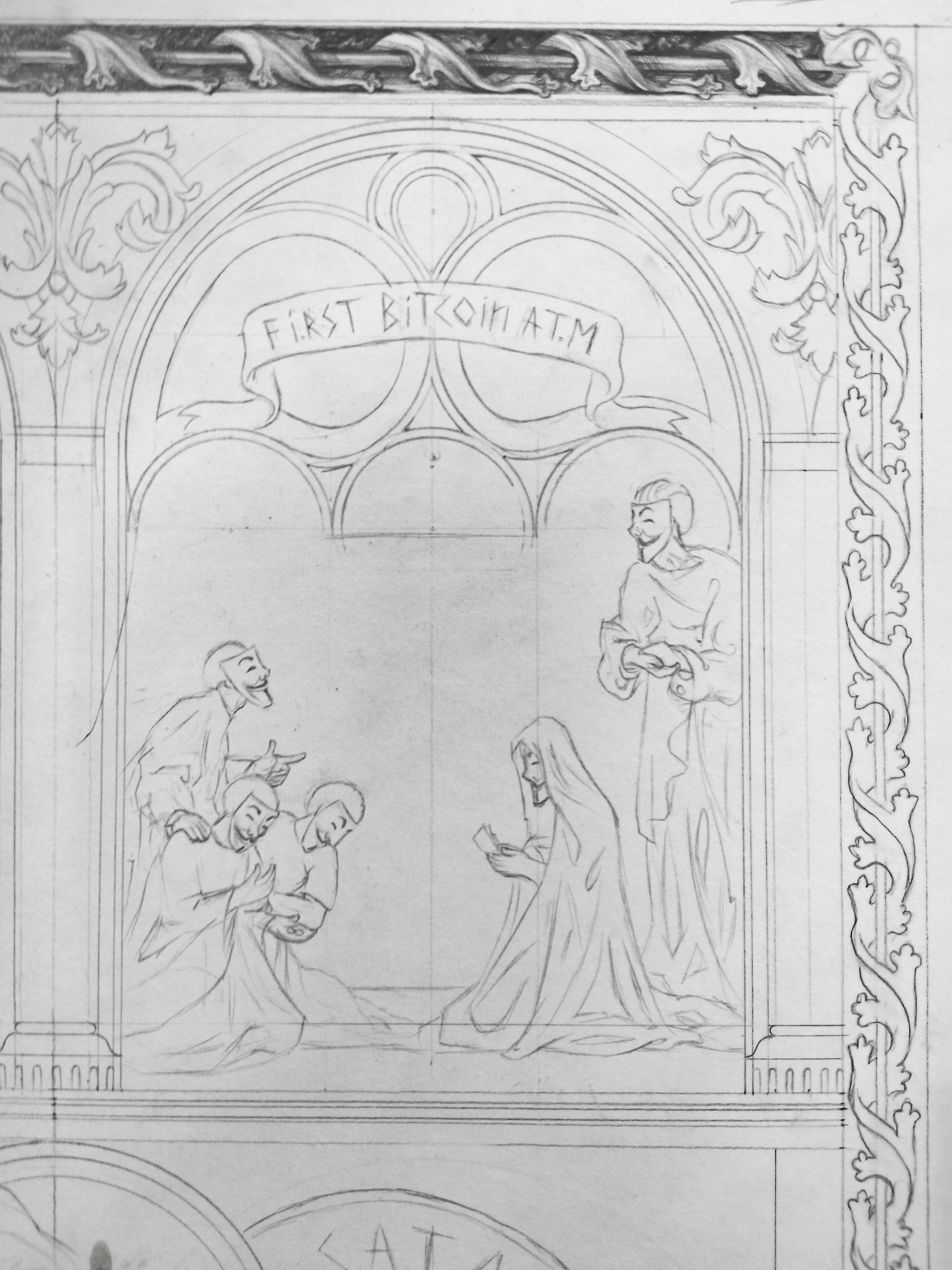 I took a few hours and started working on the 3rd scene. There I placed the creation of the First Bitcoin ATMs. On October 29, 2013, a Robocoin machine opened in the Waves coffee shop in downtown Vancouver, Canada. This machine is understood to be the world's first publicly available Bitcoin ATM. Will be illustrated an exact replica of the design. Around the machine are gathered a group of peers discussing the development of Bitcoin, and one of them will even use the new service offered by Robocin for the first time.

Аfter 35 hours I finished most of the scenes. I started the 4th scene - the MtGox hack. The man who lost a lot by freezing the withdrawals from the exchange is depicted in the center. Another one is holding him up, and giving him reassurance. Around them are figures holding lists of all the addresses of the lost bitcoins. 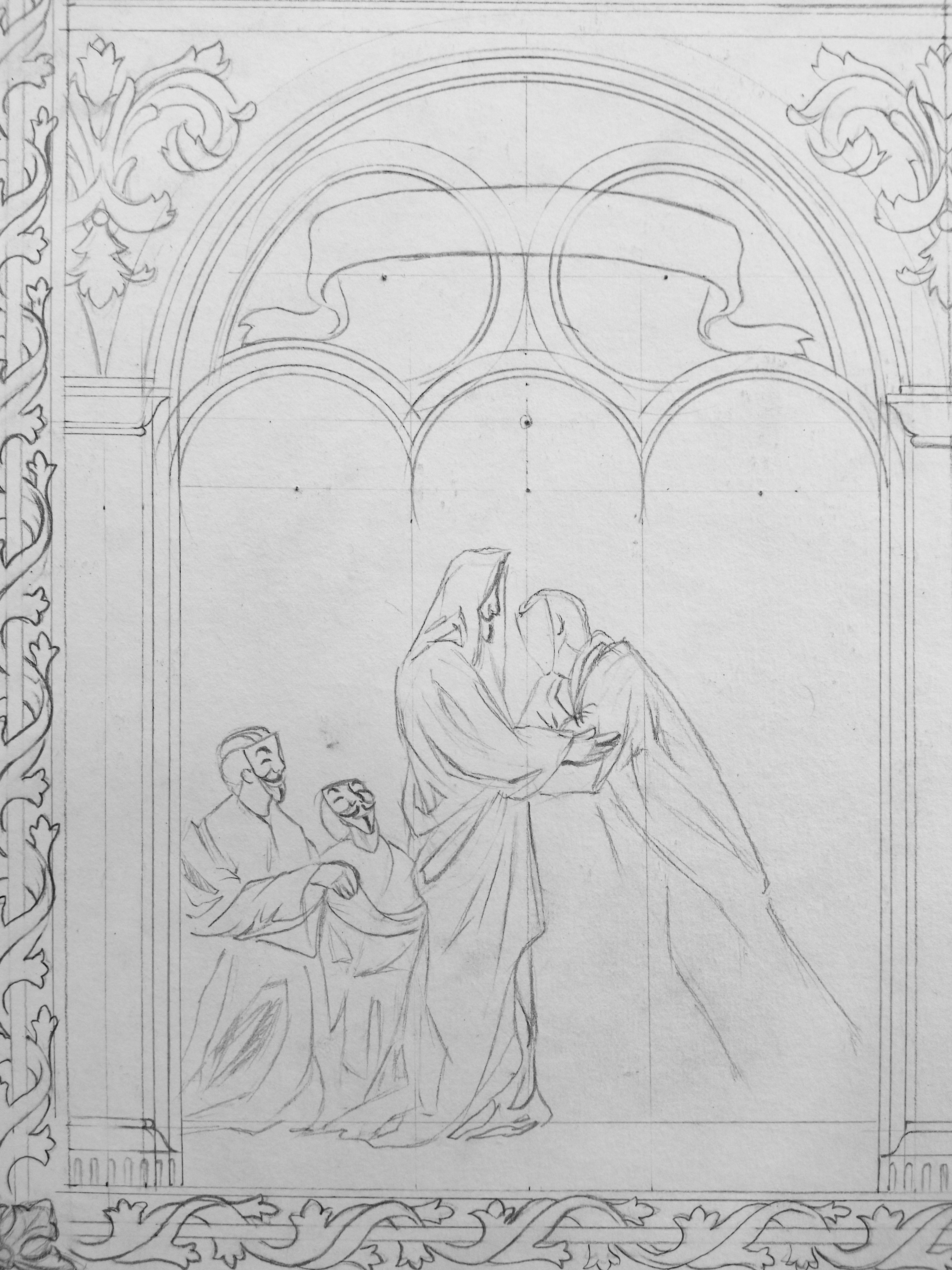 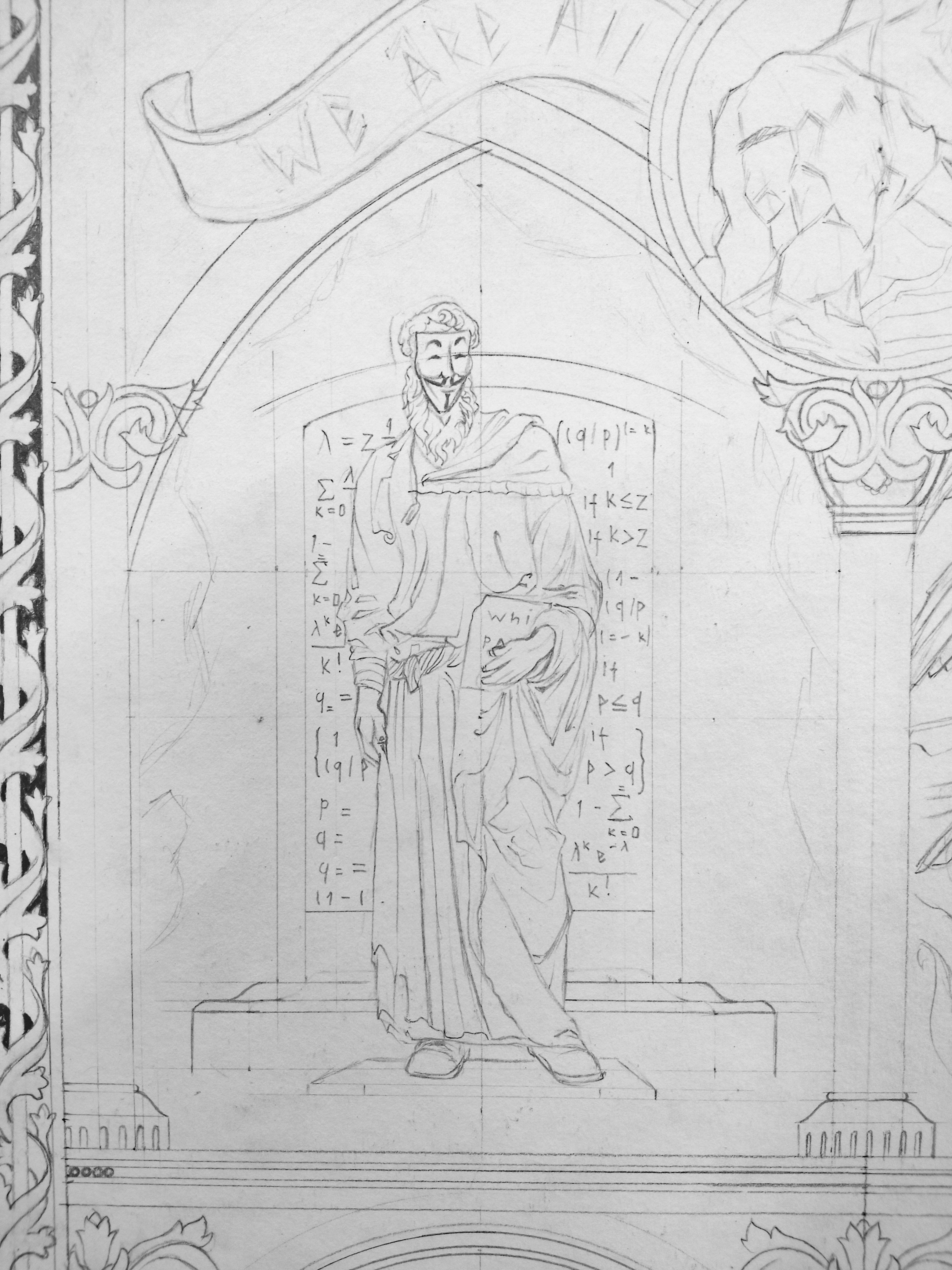 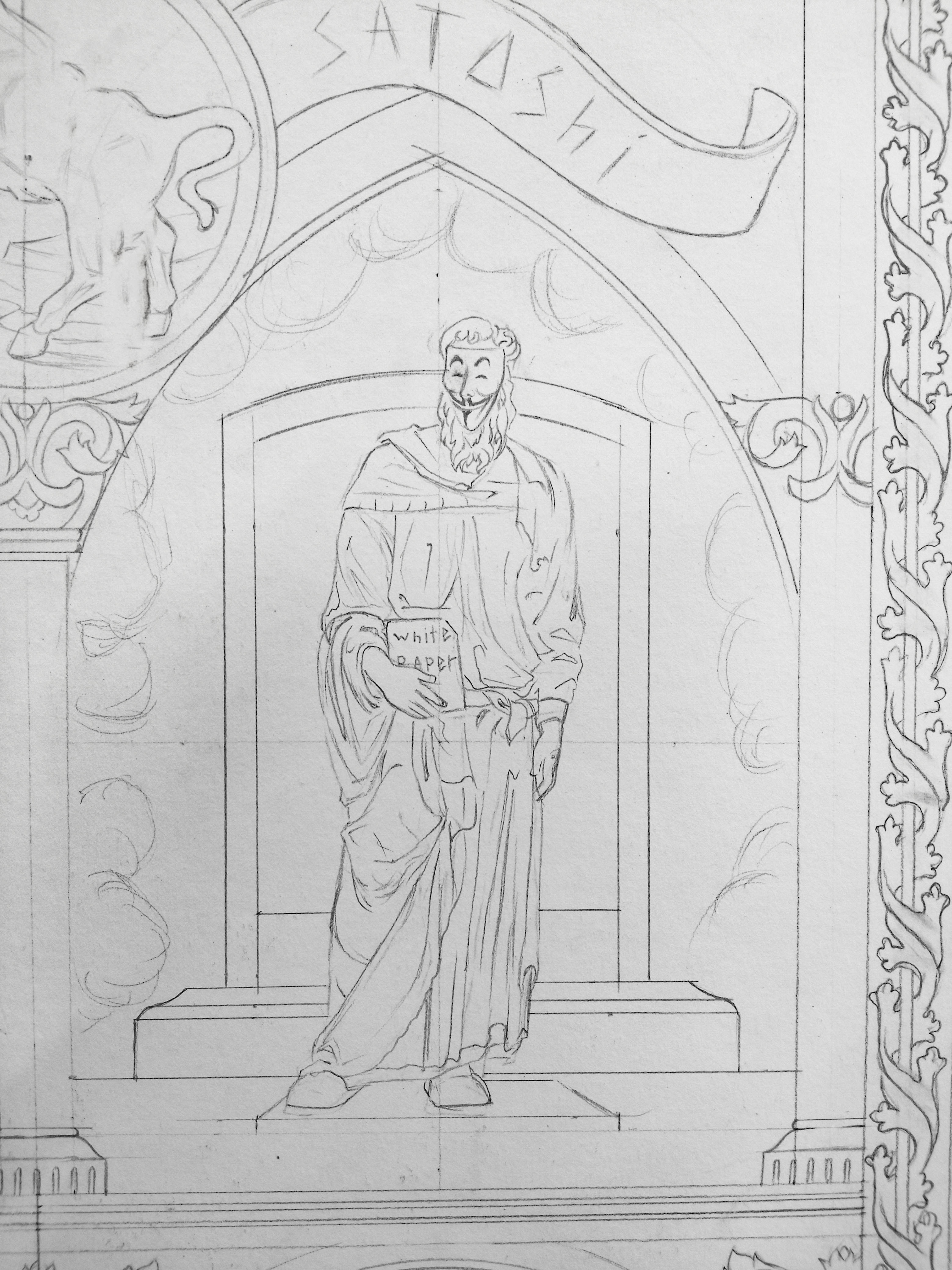 I put some progress on the framework as well. 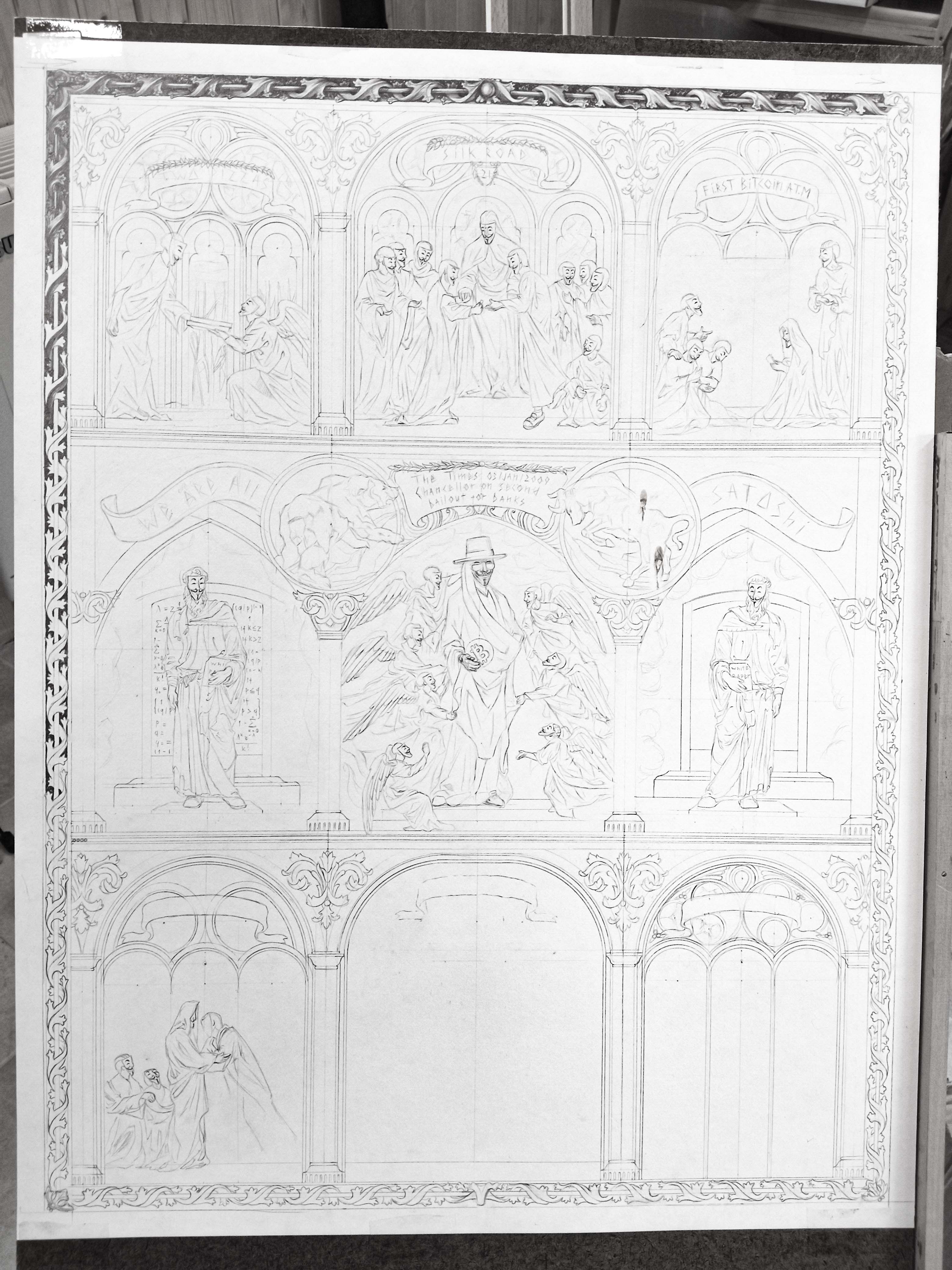 Today was a long day. After 10 hours the first scene is almost ready. I wanted to get it almost finished in order to stimulate myself  for the other two scenes that I have to draw. I put a corn field for the landscape, think it fit perfectly in the scene. 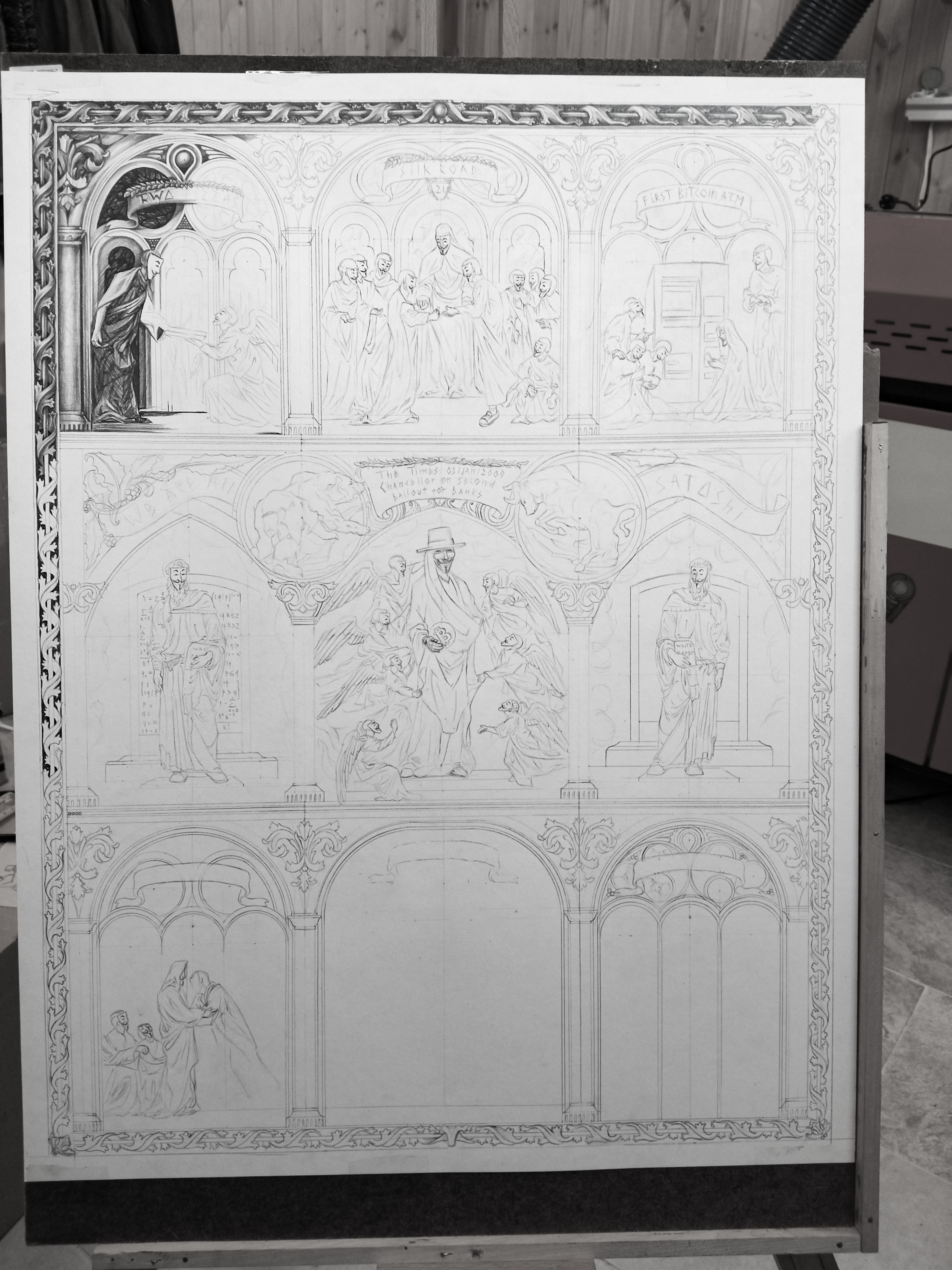 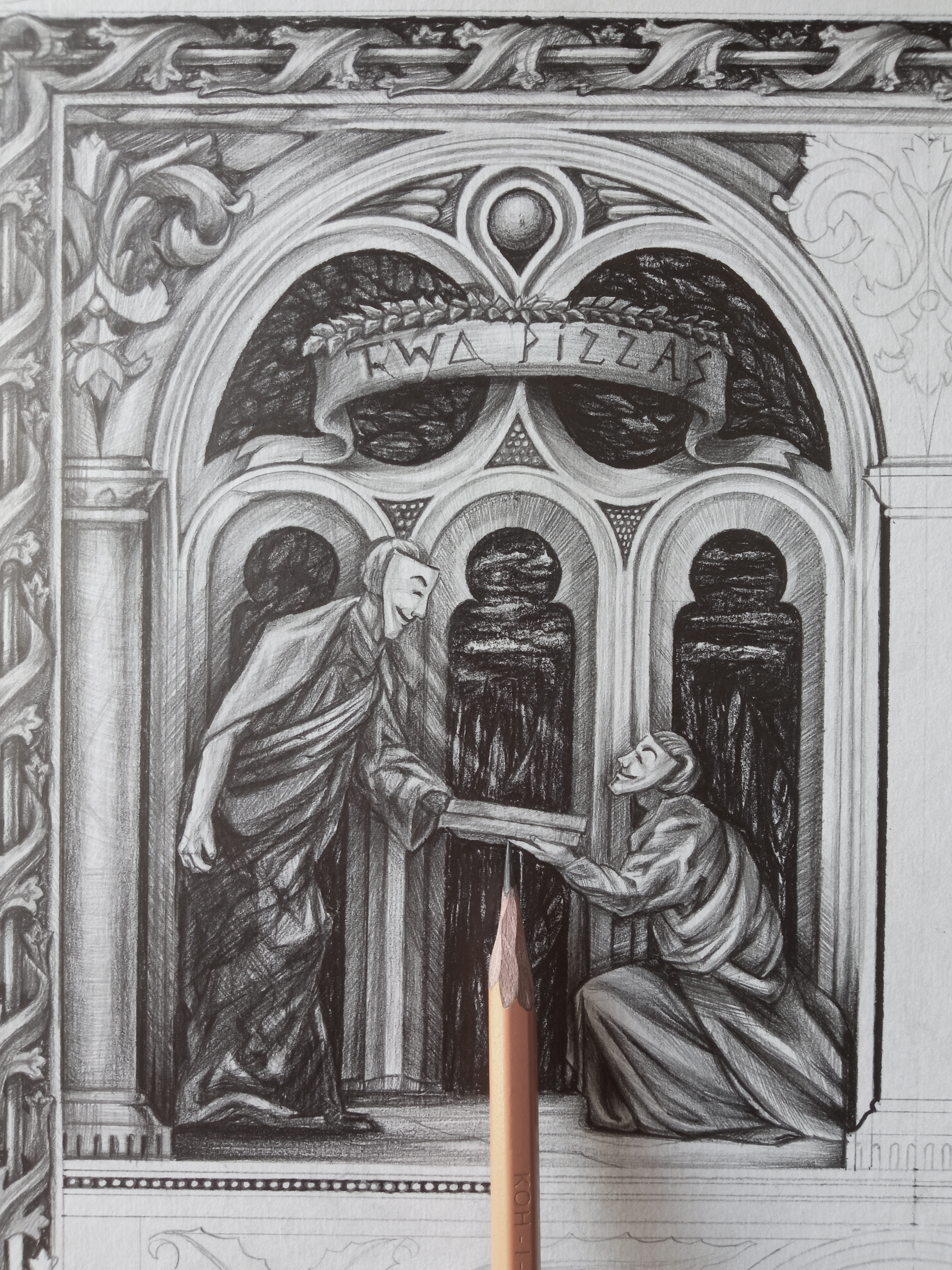 52h of work on the piece. I've only got two scenes to draw, and I've put some progress on the whole, expanding the finished part to the sides of scene one. Gradually the written explanations will become less and less, and progress will only be noticeable in the overall stage of the work. 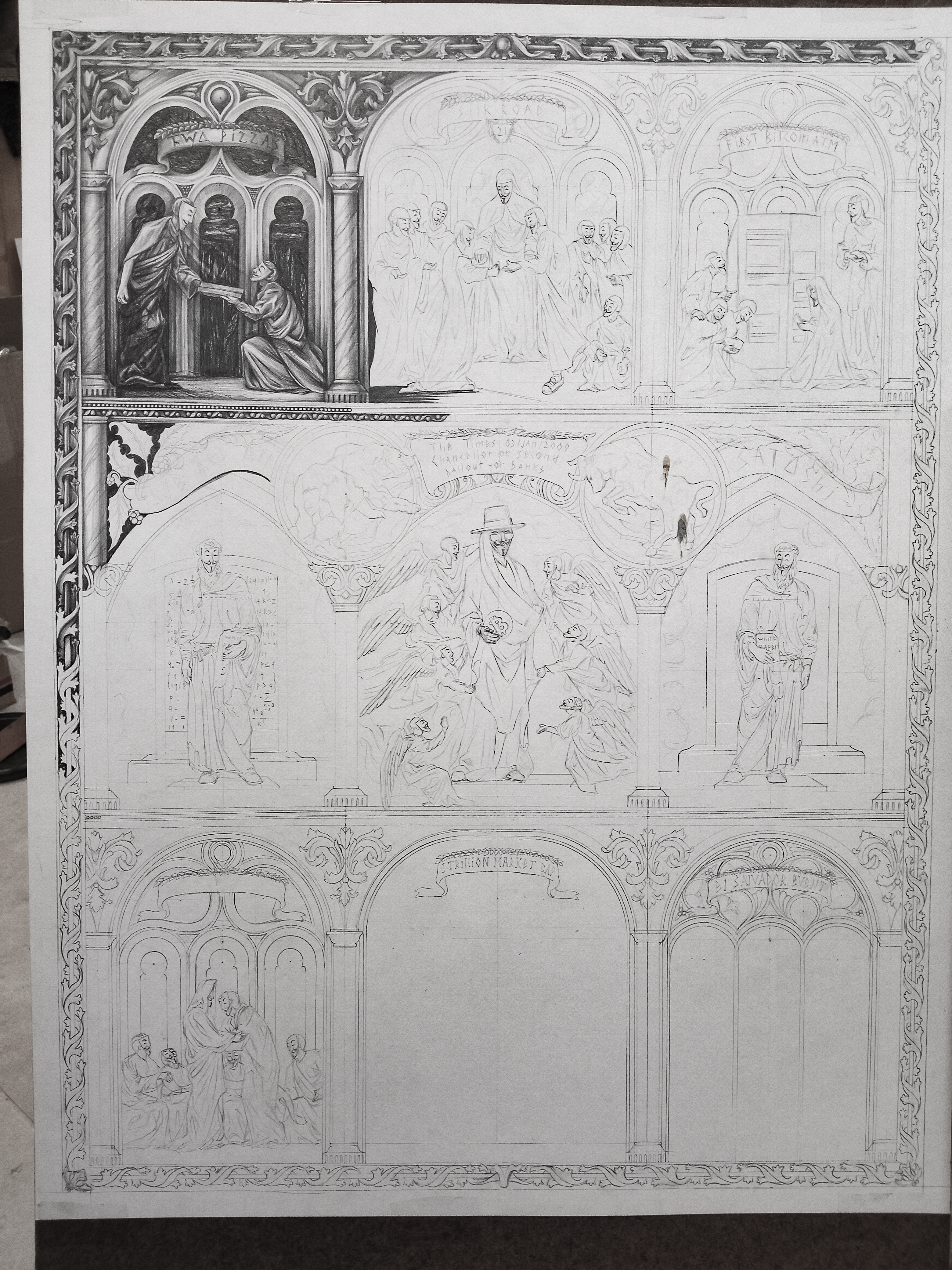 After 62 hours it starts to get interesting. Two of the scenes are almost done. 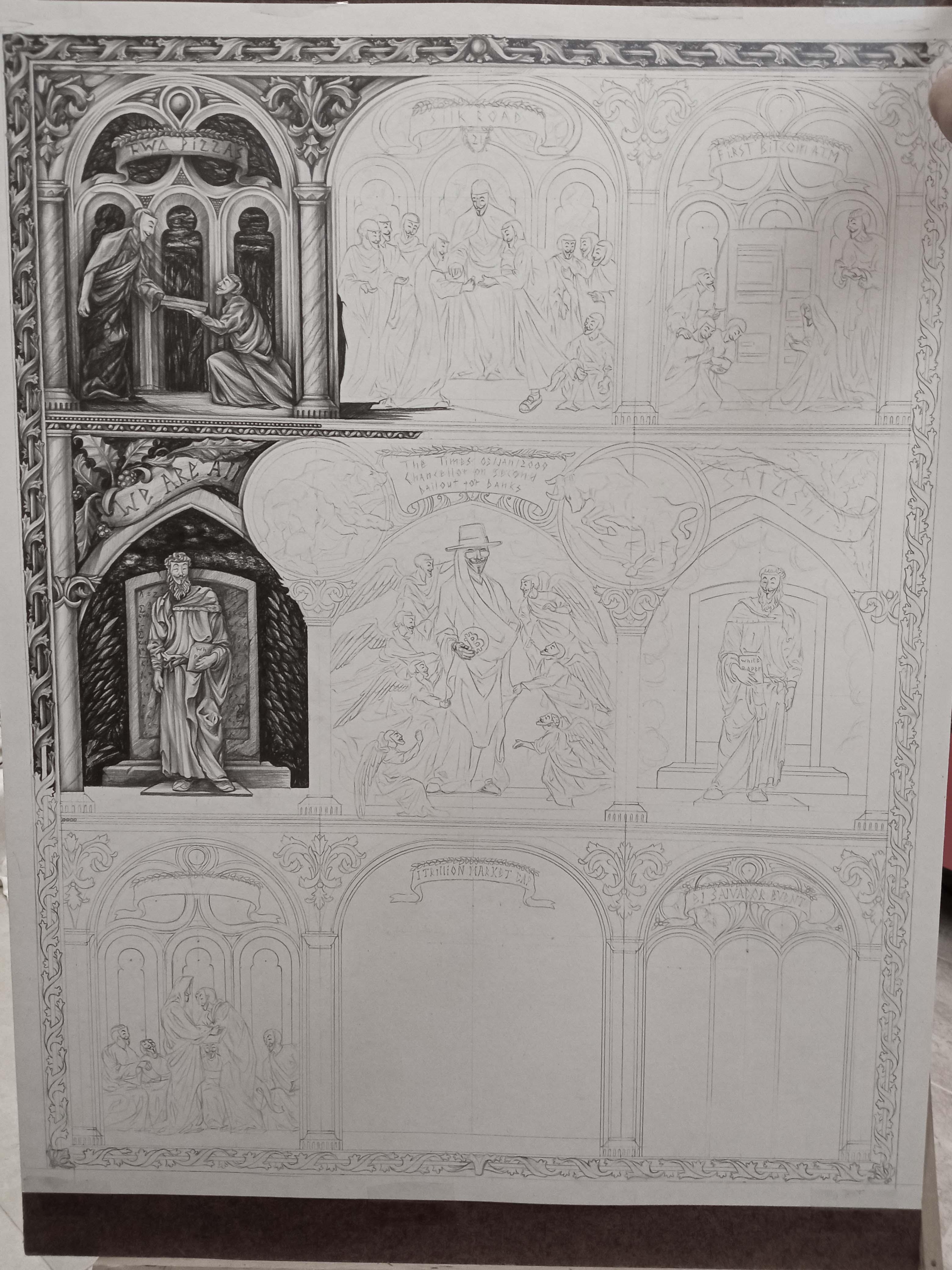 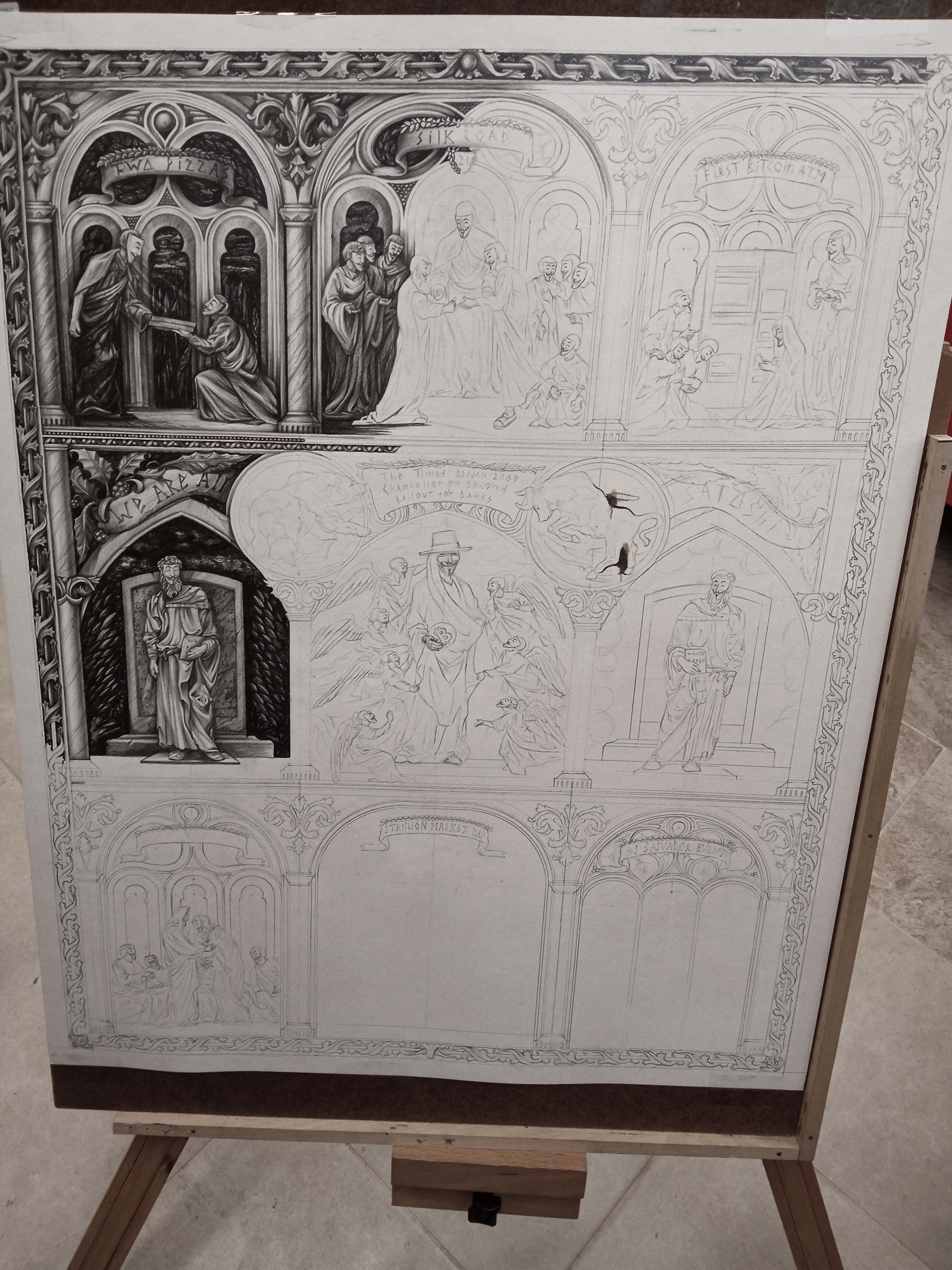 On 671275 block Bitcoin reach 1 trillion market cap. Significant achievement for a piece of software that worth nothing 12 years ago. The scene depicts two peers observing the merkle tree of the block 671275. Еach leaf symbolizes a transaction that occurred during that block. At the top of the tree glows a sphere with the number 9. One of the numbers implemented deep in the Bitcoin code by Satoshi himself. 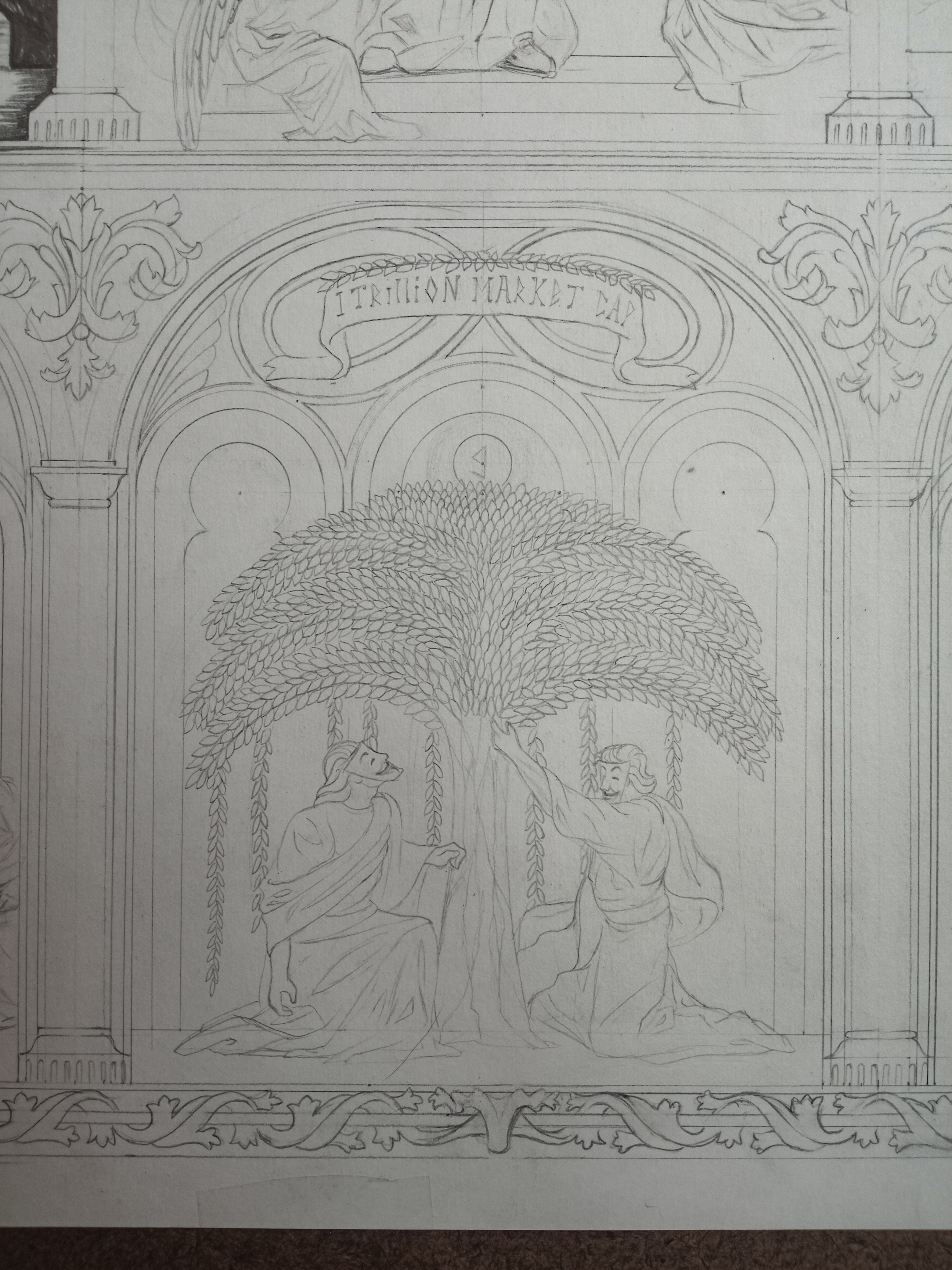 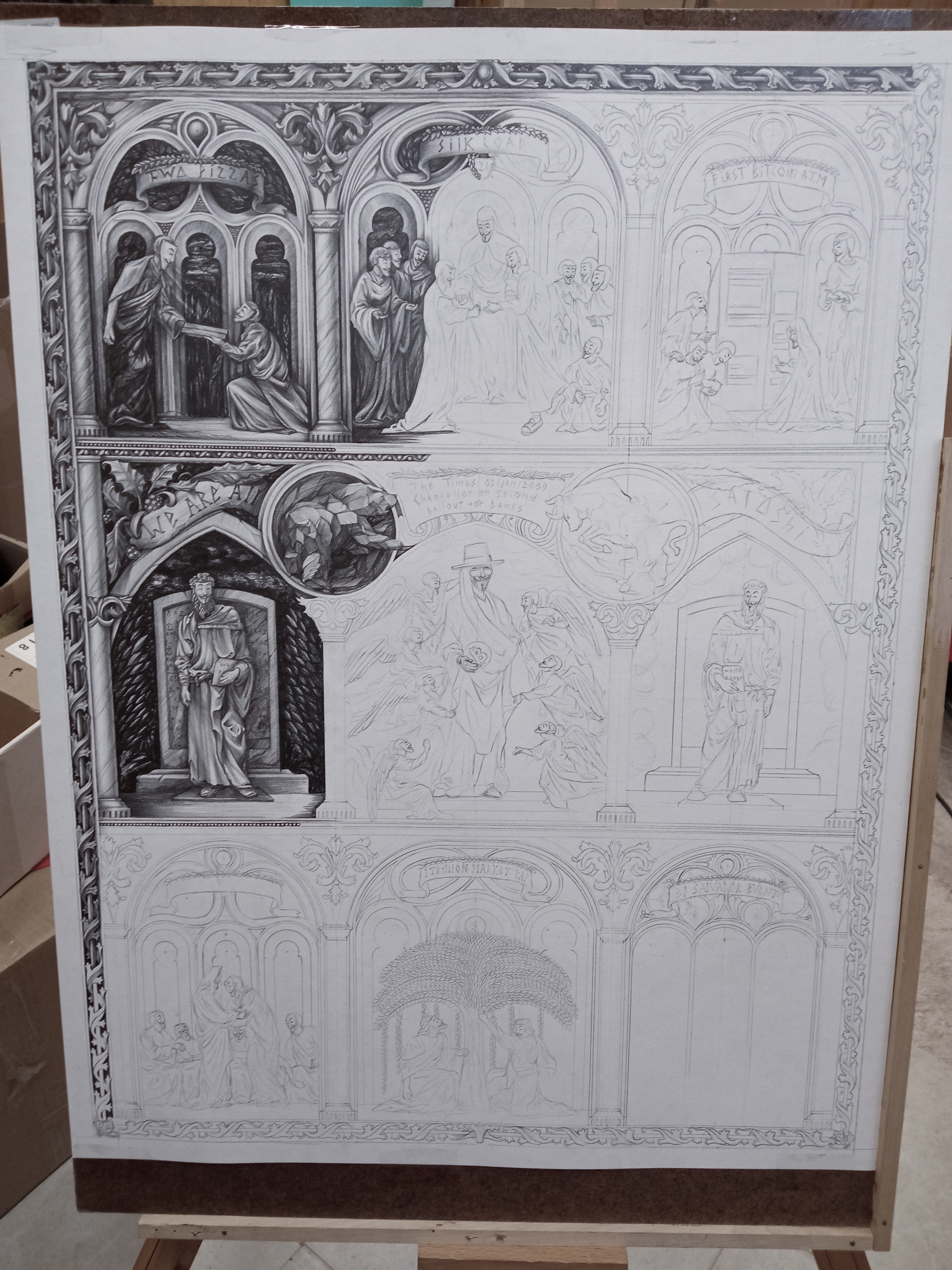 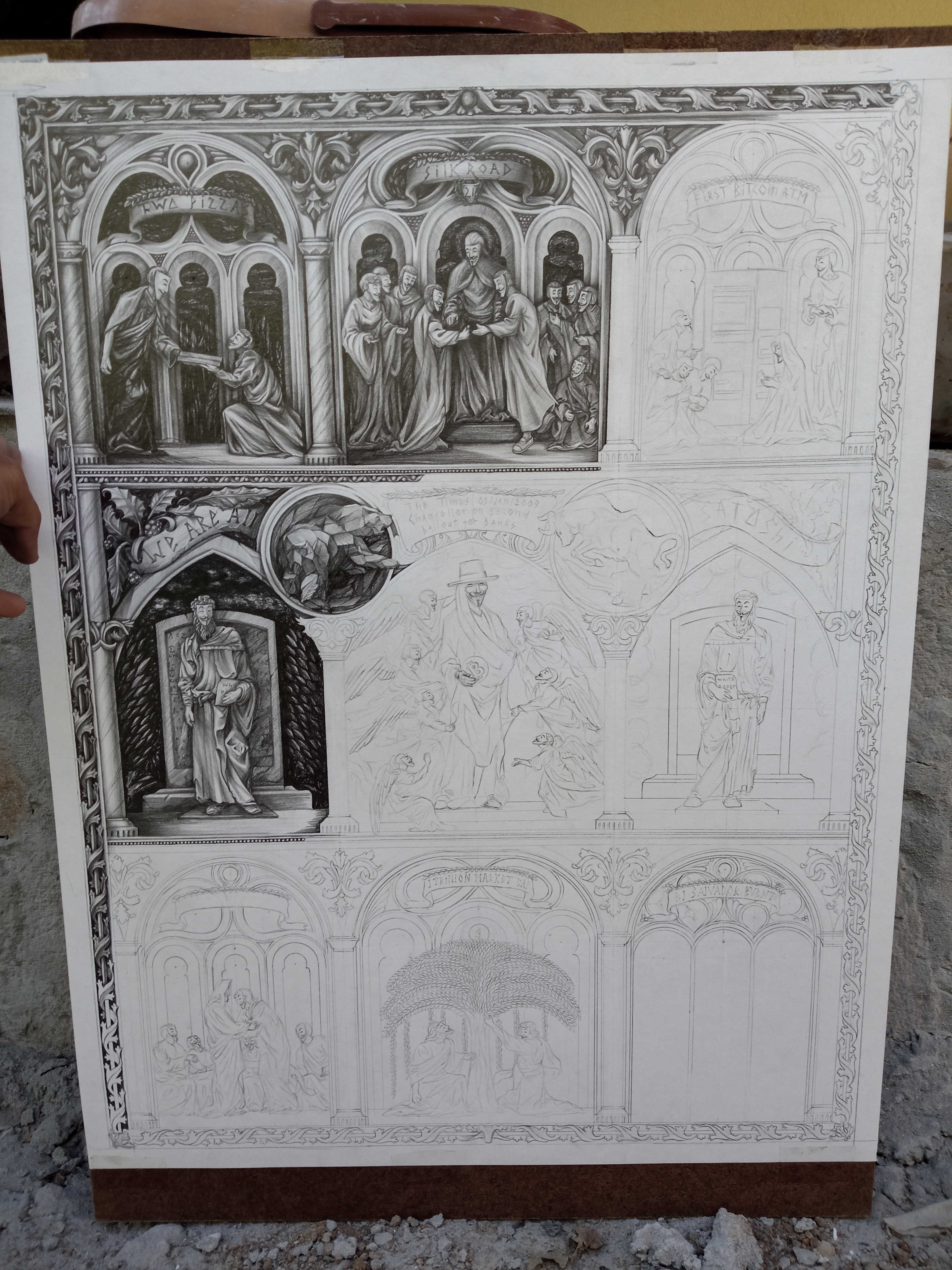